Gage County is in southeastern Nebraska. It was founded in 1856 and named in honor of the Reverend William Gage, a Methodist minister, who was chaplain of the first territorial assembly. The southern half of the county was set aside for the Otoe-Missouri Indian Reservation between 1855 and 1882.

Adams was named in honor of John Adams, one of the first settlers in the Nemaha Valley, in 1857. In the 1870's John Adams offered the Atchinson and Northern Railway Company interest in all the lots of the town if they agreed that no saloon should be permitted to do business in the town of Adams. Learn more about Adams.

Barneston is located on the site of the former Otoe-Missouria Indian Reservation. The reservation was located here from 1855-1882 when the Oto Nation moved to Oklahoma and the land was sold to settlers. Frances Barnes and his half-blood Oto wife Mary Jane, were merchants and farmers on the reservation since 1859, remained and the land was developed into a townsite. Although not on its original site, the Indian Mission School still stands in the village. Learn more about Barneston.

Beatrice, the largest city in Gage County, is also the county seat. The city was named in honor of the eldest daughter of Judge J.F. Kinney, first president of the Nebraska Association. The town's name is pronounced Be-at-trice instead of the common pronunciation.

The town of Beatrice was founded in 1857 by a group of pioneers from St. Louis, traveling by the steamer "Hannibal" up the Missouri River to the new territory of Nebraska. While aboard the steamer they organized an association and selected a committee to "explore Nebraska for the purpose of selecting a town site." This committee left the boat at Nebraska City, divided themselves into two groups and set out to find a suitable location for the town site. One group proceeded directly west from Nebraska City. The other group traveled in a southwesterly direction and made camp one night on the banks of Indian Creek at its junction with the Big Blue River. This site selected, and the first building built, known as Pap Towle's cabin, in about the same location as the Gage County Museum.

Beatrice's main street, was known as the DeRoin Trail in the 1840's through 1860's. The trail crossed the Big Blue River at Beatrice and continued west until it joined the Oregon Trail. The rock bottom ford can be seen looking south from the Court Street bridge.

Beatrice's Downtown Business District features some fine examples of cornice detailed storefronts. Many dates of original construction are still visible. The oldest building in its original condition stands at the corner of 5th & Court. It was build as the Gage County Bank in 1874 of native limestone. Located at the corner of 6th & Court is the Paddock Kensington. It was formally the Paddock Hotel which was rebuilt in 1924 by interested citizens after the original Paddock Hotel burned. It is an example of early 20th century Renaissance Revival architecture and is listed on the National Register of Historical Places. (See Beatrice website.) Learn more about Beatrice.

Clatonia was incorporated as a village in 1893 after the land was donated by the Steinmeyer family. It was named for the Clatonia Creek which flows nearby. Learn more about Clatonia. 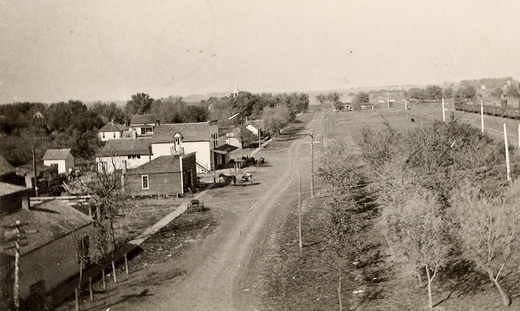 Cortland was founded in 1884 along the Union Pacific route. The town was first called Galesburg in honor of the man who owned the ground where the town is located, but since there were so many towns by that name, it was changed to Cortland. The name was suggested by one of the men connected with the railroad town site committee, it is said that it was named after Cortland, New York. (See Cortland website.)

Filley was named in honor of Elijah Filley who donated the land in 1882. The stone barn, built in 1874, is still standing two miles southwest of Filley and is part of the Gage County Historical Society's properties. Learn more about Filley.

Liberty was nicknamed "Stringtown" because of the way the town grew up around the railroad. Although this area was settled as early as 1855, the town was not developed until the railroad came through in the 1880's. During the building of the railroad there were at times 400-500 railroad workers besides the residents in the town. Learn more about Liberty.

Odell was founded in 1880 and named in honor of LeGrand Odell, an early settler. Mr. Odell sold part of his land to the Burlington Railroad to supply them with a place for a depot, tracks and other buildings. (See Odell website.) Learn more about Odell.

Pickrell was originally known as Austin and was located a little further east of the present site. Two early settlers, John Pickrell and Edward Austin operated a mill at this location. In 1884 when the town site was laid out, higher on the hill, the name was changed to Pickrell. (See Pickrell website.) Learn more about Pickrell.

Virginia was named in honor of Virginia Lewis Dalby whose father, Mr. Lewis, was a large landowner in Gage and Pawnee counties. Learn more about Virginia.

Wymore was founded when the Burlington Railroad was turned down by Blue Springs to build their railway center there. The railroad offered Blue Springs a deal in which the town would provide the land for a depot, business buildings, tracks, and a round house. In return, the railroad would help the growth of the town by providing good transportation in both directions. In 1881 Wymore was established when Samuel Wymore donated the southeast section of his land to the Burlington Railroad. Wymore experienced rapid growth and became the headquarters for the Wymore division of Burlington.  Learn more about Welsh setters to the area with Great Plains Welsh Heritage Project based in Wymore (See Wymore website.) Learn more about Wymore.

Ellis was named in honor of Beatrice banker John Ellis. It was established along the Rock Island Railroad line.

Lanham is located on the Nebraska-Kansas state line and was named after an official of the Chicago Burlington and Quincy Railroad in the 1880's.

Rockford was founded by William Girl in 1858 and is named for the rock quarries near Mud Creek.